Each box comes with two unique 8-week-old succulents. Perfect for your home, apartment, office, studio, or dorm, these little plants arrive potted and ready to grow! Add ’em anywhere you want a pop of color and a boost of oxygen! 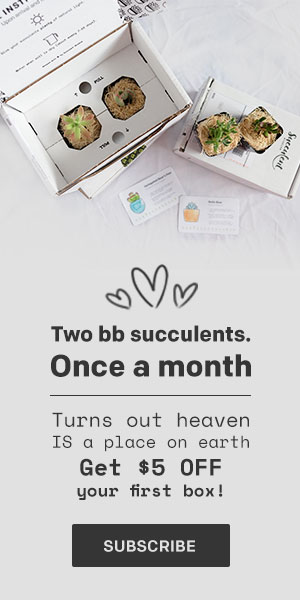 Disclaimer:I received a product in return for my opinion

The fur babies got an awesome subscription box today filled with goodies for them and me too!

There is Butter lurking in the background just waiting for his toys! He loves toys with feathers on them and the Pouncing Cats Subscription Box came with 2 mice toys with feathers,A coffee mug for me ,A laser toy,Stuffed fish toy,Crinkle ball ,2 Other balls and a Gift from Simom And Garfunkle they sent a can of dinner !  (meet them here)

This Subscription box is a must have for you and your fur babies.You get a bunch of nice goodies in the box .Click HERE to get yours today! You can also purchase a one time box if you don’t want the subscription ,But once you get one you will love it!  Hurry Christmas is coming 😉

@RockTheVote -Are you ready!?

Are you ready!? Tomorrow  November6,2018 is the day.GO VOTE It Is more important then ever to have your voice heard,Rock the vote today!

– This is the largest, most diverse generation in our country’s history
– There are more than 70 million young eligible voters
– By 2020, young people will comprise nearly 40% of the electorate
– One-third of the Senate is up for election.
– ALL 435 House of Representative seats are up for election
– 36 states and two territories are holding elections for Governor
– 87 out of 99 state legislative chambers have elections
– 34 states currently have “trifectas.” This means that one political party holds the governorship, a majority of the state senate, and a majority in the state house.
-Issues such as criminal justice, gerrymandering, environment, minimum wage, women’s reproductive rights, labor laws, voting rights, school funding, sexual assault, animal racing, voter ID laws, and more are on many ballots in the form of ballot measures, referendums, and propositions.

Rock the Vote is a nonpartisan nonprofit dedicated to building the political power of young people.

In 1990, music executives founded Rock the Vote in response to censorship of hip-hop and rap artists. Our first partnership, with MTV, helped us to promote the message that “Censorship is Un-American” and to engage young people across the country in fighting back.

For over 25 years, Rock the Vote has revolutionized the way we use pop culture, music, art, and technology to engage young people in politics and build our collective power.

We’ve registered and turned out millions of young voters on campuses, in communities, and online. We’ve successfully fought for — and defended — voting rights and increased access to democracy. We’ve raised awareness and campaigned for issues that impact the lives of young people. We’ve pioneered innovative ways to make registration and voting work for our generation, and built open-source technology to empower other organizations, too.

Disclaimer:I received a product in exchange for my opinion

Jerky Dynasty sells Exotic and Gourmet Jerky and Gift Packs AND . Customers can donate directly to a soldier or have us select the member.

Here are the kinds of meats you can get:

Gifts for all Holidays. Gifts like subscription boxes,stocking stuffers and so much more! They have a good selection to choose from for your gift giving, perfect gift for men (and woman too)

I never tried any exotic meats before,so this will be a treat.I recevied the Staff Favorites to review ,Which is 20 pieces of Buffalo Bob’s Jerky stocking Stuffers

First I tried the maple duck meat stick ,I never tried duck before either.It was good .So very tender and juicy I liked it especially the texture ,It was not tough and easy to eat

Same with the Jerky I tried a few pieces of it and same deal full of flavor not salty and very tender good stuff! I am now a fan!

So far I tried the Alligator,Beef and buffalo and snake ,yes snake and It was surprisingly good tasting

Plus get 10 percent off with code: EZEE